This is the last installment of our three part series on batteries. In this article we will explain the best way to charge your battery to ensure your battery will last as long as it should.

Battery chargers come in all different shapes sizes and price brackets. Cheap battery chargers are unfortunately probably one of the biggest killers of batteries. The main reason they kill batteries is because they do not have the ability to regulate the amount of charge going into the battery. If the battery is left unattended and on too long then the battery will be overcharged and irreversible damage will be done.

The most popular and effective battery chargers on the market are the ones that have the ability to give a three stage charge. These days the three stages can be split up into as many as 7 stages, however it is pretty much the same philosophy however they have more stages for the battery to cool down and level out the state of charge before carrying on with the charging process.

These battery chargers are pretty expensive compared to the cheaper ones, but when you consider how much outlay you make for a decent battery and the extended life you will get out of it by following good battery charging practices the initial price will be offset in a couple of years. Not to mention the increased capacities that your battery will be able to give you.

The first stage of 3-stage battery charging. Current is sent to batteries at the maximum safe rate they will accept until voltage rises to near (80-90%) of full charge level. Voltages at this stage typically range from 10.5 volts to 15 volts. There is no “correct” voltage for bulk charging.

The 2nd stage of 3-stage battery charging. Voltage remains constant and current gradually tapers off as internal resistance increases during charging. It is during this stage that the charger puts out maximum voltage. Voltages at this stage are typically around 14.2 to 15.5 volts.

The 3rd stage of 3-stage battery charging. After batteries reach full charge, charging voltage is reduced to a lower level (typically 12.8 to 13.2 volts) to reduce gassing and prolong battery life. This is often referred to as a maintenance or trickle charge, since its main purpose is to keep an already charged battery from discharging. 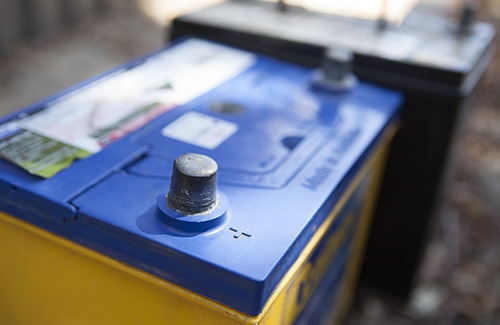 Did you miss our first installment? Find out more about battery voltage and linking in Part 1 of our series on Batteries. 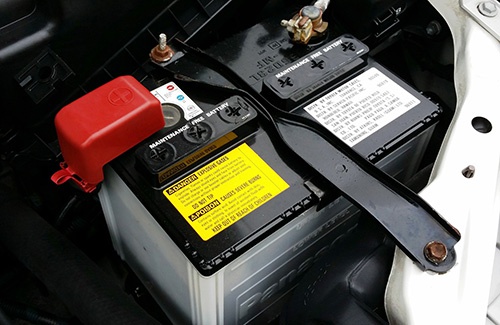 Don’t forget to check out Part 2 of our series on Batteries. It has all you need to know about choosing the right type of battery for the job.

To prolong the life of batteries and in particular deep cycle batteries, the following tips will ensure healthy, longer lived batteries. 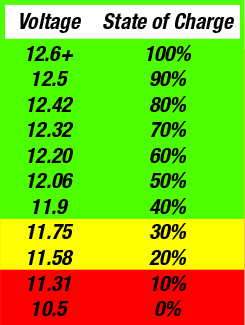 This chart gives you a rough idea of where and what voltages will be in comparison to the battery’s state of charge.