The Rowley Shoals is a dream destination for many recreational fishers and with good reason.

Located around 260 kilometres west of Broome, this group of three remote coral atolls rising from the deep ocean floor is home to many of the most iconic gamefish in the world including sailfish, marlin, wahoo and dogtooth tuna. 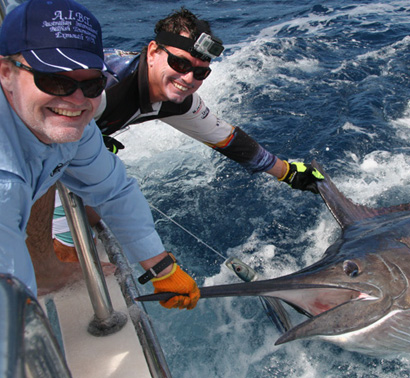 Getting to the Rowleys usually involves a live-aboard charter which spends several days out there, offering access for a small group to the great fishing, and diving or snorkelling, in the area.

There are restrictions on fishing at the Rowleys, particularly around Clarke and Imperieuse, which form the Rowley Shoals Marine Park, but there are still great angling opportunities to be had.

These reefs rise out of the ocean from depths of hundreds of metres, and the deep blue waters around them offer exciting fishing for the species mentioned earlier, plus spanish mackerel and yellowfin tuna.

In closer to the reefs, there is the chance to tussle with tackle-testing giant trevally and red bass.

Inside the reefs themselves there is some quite extraordinary shallow water fishing for species such as coral trout and long-nose emperor, plus trevally.

This variety offers anglers the chance to try several different styles of fishing around the Rowley Shoals.

Any keen recreational fisher owes it to themselves to visit the Rowley Shoals at least once. The best time to visit is between July and October as the weather is cool and dry.