There are two methods of filleting a fish.

The first method we will go through is one that professionals generally use. When you make the first cut the knife will be at an angle that takes the cut high into the neck meat, angling back to exclude the pectoral (front belly) fin. You also tilt the knife a little to angle in towards the head, and cut right down to the backbone. You then turn the blade towards the tail and lay it parallel to the backbone and cut towards the tail with a sawing motion. Hold the fish by the head with your free hand to get the cut started then, once underway, place your free hand flat on the side close to the area where the knife is cutting. 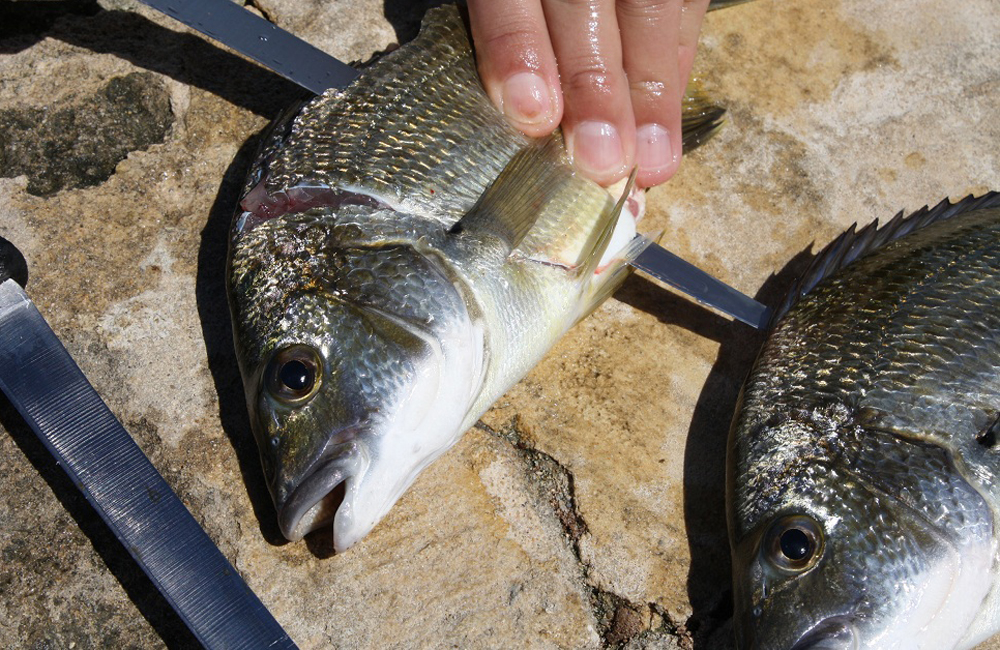 Once you have the side off, turn it over and cut the whole rib cage out and discard it. When you do this, cut with some upward pressure towards the bones if you want to retain the belly flap meat. You may wish to discard the whole rib section and belly flap, as it is often tainted and never as good to eat as the rest of the fish.

Finally, to skin the fillet, make a little incision at the tail and between the skin and the flesh, enough to allow you to take a firm hold on the skin. Then pull firmly on the skin as you saw the knife blade back and forth beneath it. Do not try to do this by moving the blade forward. Keep it going back and forth in the one place and pull the skin along the blade.

The second method of filleting, which is the best one to adopt when you have a fish with a bulky, and knobby backbone and heavy ribs, is to start right behind the head with a shallow cut, then carry that right down the back to the flat tail area behind the second dorsal fin. Go back to the head and keep running the blade down the same cut, with the blade flat to the backbone. Lifting the fillet with the other hand as you go until you hit the spine. At this stage, work the blade up over the rib cage in a series of short strokes, then make a cut across the tail and saw forward until you hit the rib cage again. At this point, you should be able to lift the fillet and finish the job off by cutting through the layer of skin along the belly of the fish. This method takes a little longer, but it is a good one for people who are not skilled with a fillet knife and who want to get every scrap of meat off the backbone. 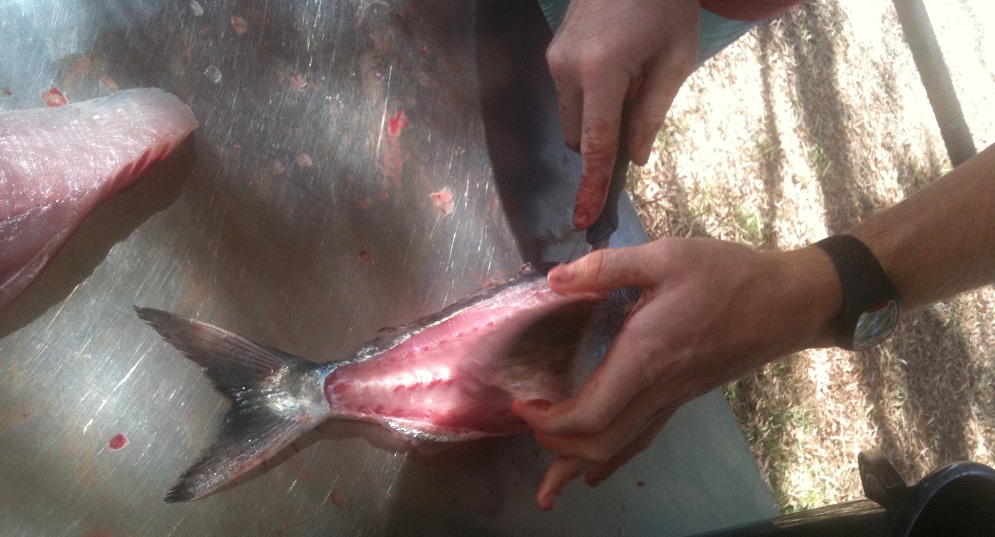 When you have filleted a big fish, there can still be a good deal of meat left on that backbone, so check out your cookbooks for some fish soup recipes. Fish soup can be delicious. Some fish carry a lot of oil in their skin which is released into the flesh when cooking. This is one of the reasons for skinning fillets. People who have in the past discarded some of the weed-eating fish, such as luderick and buffalo bream, should try them skinned and with the whole gut and rib area removed, They taste completely different this way.

When you have a really big fish to handle, say something upward of 6 kg, you might want to cut it into steaks. This involves a series of cuts down to the backbone either side of the fish, spaced as wide apart as you want each steak to be, then cutting the backbone through with a saw. The other way to do this is to freeze the fish whole, then take it down to your friendly butcher and ask for it to be put through the power saw. This will cost you a steak or two, but you get a great job.

Mind you, you don’t have to cut a big fish into steaks. All you are doing when you slice up a fish is reducing the meat to portions you can handle and easily cook. Some people, myself included, prefer to fillet even the biggest fish, then cut those fillets up into strips which can be varied in size and shape to suit different dishes.

A Note on Scaling

Fish are easier to scale when they are in one piece. It is not necessary to scale the fish if you plan on removing the skin from the fillet. Take special care of those areas close to the fins and spines that many people avoid doing because they fear puncturing their fingers on a spine. Just take it easy with this job and keep in mind that it is a potentially flesh-bruising operation.